Some called it Calpe meaning steep rugged hill made of rock, the Phoenicians called it Ifach which meant north. So the whole town of Calpe was referred to as the north craggy rock, having Gibraltar as the south reference. Calpe, which is north of Altea and south of Denia, is an ideal vacation spot on the Costa Blanca on the Mediterranean Sea in Spain. Going back as far as 1935, Calpe took advantage of its privileged coastal location and inaugurated its first hotel in the town where some well-known celebrities such as Hemingway once stayed. 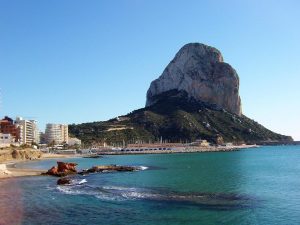 A closer look at Calpe and the Penon

As mentioned earlier, Calpe’s main attraction is not its town nor even its beautiful soft sandy beaches but the tall craggy rock formation called the Penon de Ifach. It is hard to believe, but this is the smallest natural park in Spain together with the Columbretes Islands in Castellon. It was declared a Natural Park in 1987 because its 300 varieties of vegetation and colonies of birds needed protection from the expansion that this small fishing village was undergoing at an incredible speed. It measures about 35 hectares and has a botanical, landscape and tectonic interest. The swift or martin birds together with the silver seagull and plants not found anywhere else are closely protected because some of these were about to be become extinct. Not everyone may feel capable of climbing this fascinating rock formation, but from the top, the panoramic view of the Costa Blanca is unforgettable. You can zig-zag your way up, changing direction and passing through a tunnel which was built in 1918. Even though it is free, during the summer season and Easter week, you have to get a ticket because there is a limit of about 50 people who can go up every hour. If mountain climbing has always been on your list of something impossible to do, then you will have to cross it off once you have done this marvellous experience.

To, From and staying in Calpe

If you have planned on doing a car hire, and have decided to catch a flight to the Valencia airport in Manises, then you have about a 105 kilometres drive to Calpe. Or if your flight has taken you to the Alicante airport, then you are only about 61 kilometres away. Either way, you can take the National Highway N-332 which is free or the A-7 Pay Highway which is quicker and safer, especially in the summer season. There are also buses from either of the airports.

As in all tourist areas, there are many types of lodgings to choose from. There are campings for the nature lovers or on a limited budget, economical hostels which could cost about 45 euros, one which is about 80 euros right at the foot of the Penon, and hotels up to about 150 euros right in front of the beach.

As in all shore areas, the seafood is usually quite fresh, but here in Calpe ( http://www.alicante-spain.com/calpe.html ) the restaurants at the harbour offer their goods openly to their clients for them to personally choose which piece they prefer. It seems like a food auction because the waiters are out on the promenade and when the people pass by, they offer them a morsel to try and some sangria to lure them into their restaurant. The most typical dish is the ‘Arros de Senyoret’ ( a fish stew with rice) or the LLauna de Calpe ( an old fishermen’s recipe of different types of fish, garlic, tomatoes, parsely, red pepper and saffron). The paella is always on the menu, too.

Things and interesting places around Calpehttp://www.taxistartransfers.com/blog/wp-admin/media-upload.php?post_id=1760&type=image&TB_iframe=1

Either with your car, by bus or train, you should not let the opportunity to visit other cities like Benidorm, Torrevieja or Alicante pass you by. Benidorm is fun city with an incredible list of theme parks like Terra Mitica with fun rides and shows, Terra Natura where you can visit with all kinds of animals and have a splash on the water shoots or Mundomar Marine Animal Park where you can see, smell and even touch animals you had only seen on t.v. or in books. Whether you only stay in Calpe or you venture away, the Costa Blanca has everything you have ever dreamt of.