A winter warmer required? Spain can fulfil that order easily, let’s take a tasty tour of the soups and stews of Spain – tuck in! Even though a holiday to Spain in the winter months will be full of bright days, the nights can be quite chilly, and that’s the perfect time to sample some local warming food. Perhaps you’ve opted for the snow and ski option? What better than a plateful of Spanish stew after a tiring day on the slopes. Self catering means you can let it simmer all day long while the whole gang has fun in the sun – and the snow.
A change of season

As spring shows its sunny side in the coming months, there are fresh and light soups to try. Summer might bring sweltering temperatures, but you can cool down the way the locals do, with refreshing cold soups, one of them is a signature dish of Spain. Can you guess which one? 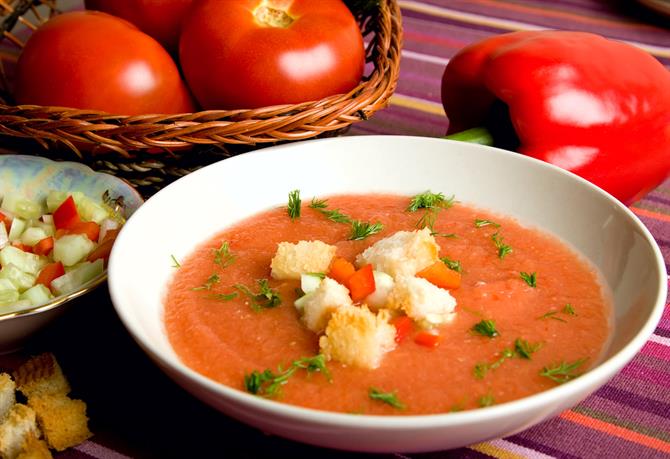 Gazpacho
Getting in a stew about cooking

A stew always seems to me to be an indigenous dish: Irish stew, Lancashire hotpot, French cassoulet. But Spain is known for diversity, and the different regions all come up trumps with their own recipes for success. Some have their roots (sorry!) firmly in the past, with Arabic influence clearly in the flavour and ingredients. Let’s see what are the different types of stews and soups, and then see if you can locate them on the menu the next time you dine in Spain. Hot and cold are up for tasting, here’s 5 of each to be getting along with. Spoons at the ready!
Warming up

Dishes for the cooler months in Spain.
1. Callos Estofados con…

Con/with…? Anything that’s handy! Depending on season and the contents of the larder, it might be chicken, pork, or freshly caught rabbit, the most likely option in the Andalucian mountains. A mixture of available meat and fresh root vegetables, with a meat stock, lots of chopped tripe, other porcine bits and pieces, and simmered for hours with paprika and seasoning.
2. Fabada Asturiana

Hailing from Asturias in the north of Spain.

Cooked long and slow, rich and full of beans, which would have been soaked overnight. It also contains a selection of pork products, perhaps Morcilla, Chorizo or Longaniza. One to put hair on your chest and set you up for a long hike in the Cantabrian mountains!

The capital city, Madrid, has one of the most famous stews of Spain as it’s signature dish. Swap those Asturian beans for chickpeas and you’re almost there. Add Pork belly, Beef, Chicken, whatever is to hand with some leafy green vegetables and a special ingredient – the Bolla. That’s a big ball of ground beef, spices and breadcrumbs and let it all simmer away for a long time, a couple of bones thrown in will add to the flavour – it’s a big one!

The other thing to remember is that its sometimes served traditional – in ‘vuelco’ fashion. First a bowl of stock, next up – the chick peas and vegetables. Finally the meat. Whatever way it’s served, it’s a very tasty bowl of stew. 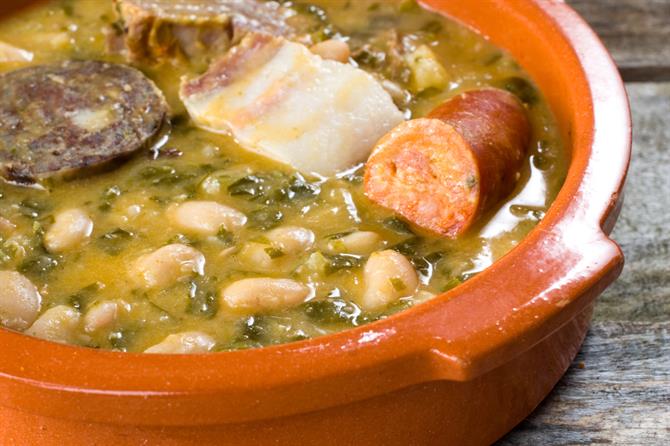 White beans and green cabbage, potatoes and fatty pork or a big piece of salty bacon, this clear stew is from Galicia with love.Served piping hot with some crusty bread on the side, it’s the perfect lunch after a windswept coastal walk, perhaps on a romantic break for two celebrating St Valentine’s day next month? I’m not so sure of any aphrodisiac properties though, it might be better to just have a lie down after lunch!
5. Cazuela Marinera

Ah, seafood, it had to make an appearance here somewhere!

Planning a coastal break in Spain? Perhaps a bargain flight into Málaga and a stay along the Costa del Sol out of season? Forget the crowds of summertime and take an early morning walk along the beach, perhaps watch the fishermen drag in the daily catch. A big Cazuela Marinera for lunch then, a bowl of mixed seafood, in a creamy broth, local bread to mop it up and a glass of Jerez sherry to wash it all down.
Cooling down

When the weather heats up…
1. Gazpacho

Think of a sweltering hot Summer’s day, and a shaded or air conditioned restaurant a few steps away form the beach. A bowl of Gazpacho will soon take the sting out of the sun and your body temperature down a few notches. Fresh summer vegetables blended into a refreshing chilled combination that shouts Spain, here’s a handy recipe for you to try out and get you in the holiday mood! 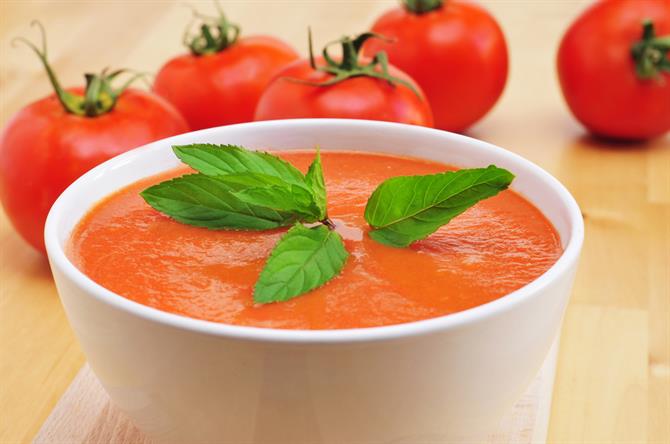 Similar to Gazpacho, Salmorejo has a few additions that change the flavour slightly. When the mercury rises, this soup is often seen as a starter, but to be honest it’s quite filling and you might just want to stop there! Hailing from Cordoba, where the temperature is hotter than most places in Spain, they know what they’re doing! Salmorejo also contains eggs and sometimes also has Tuna flaked and sprinkled on top.
3. Ajo Blanco

Garlic, of course, that mainstay ingredient of Spanish cooking. The wonder ingredient that most Spanish housewives worth their salt cannot cook without. Sopa de Ajo may have peasant beginnings and few ingredients, but is fit to feed any King, Spanish or not! It’s great if you have a cold or sore throat too. Here’s a Sopa de Ajo recipe to try.

The Almond blossom is just starting to unfurl on the trees of Andalucia right now, and it’ll be followed by the much exported and revered nut of the same name. Almonds are used to thicken sauces, in everything from meatballs to dessert, and of course for the simple yet rich soup of the same name. Served chilled, Almond soup is very fresh despite being of creamy consistency, and is completely addictive!Almond blossom 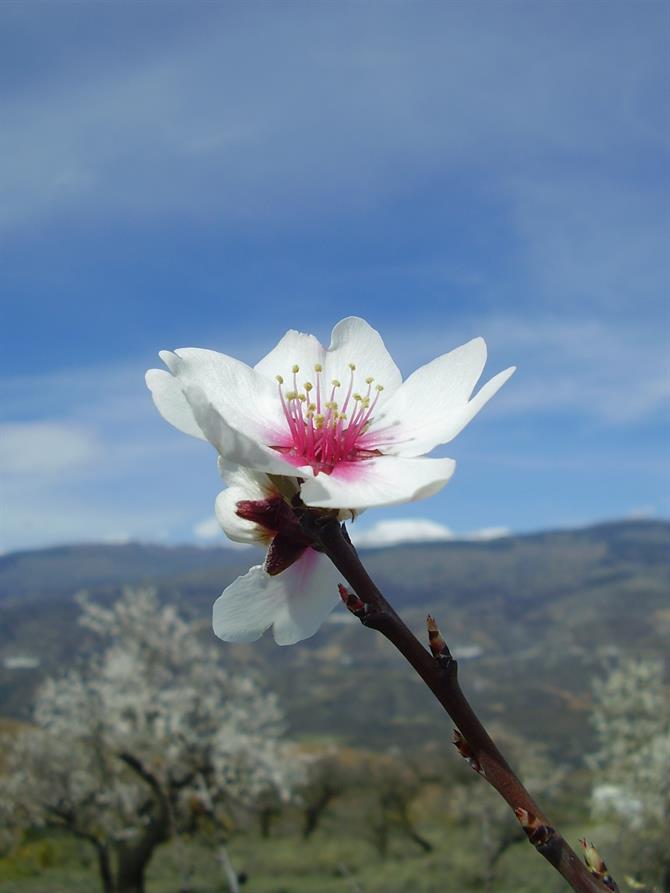 Cool and fruity, this soup will not only revive and cool you down, it tastes light and summery too. A fantastic midday bowl of this will halt the hunger pains until you’re ready for a late lunch, and is ideal to whip up in your self catering holiday home and take to the beach as a refreshing snack – better than sand sandwiches!Melon in season is so cheap here in Spain, look out for the best ones at the weekly market and bag a bargain.So, when you’re ready for another helping of any of these tasty soups and stews of Spain, well, YOU know where to come!