Their name is rio and they twist through a dusty land. Yet Spain is as green as brown, so its rivers snake through forests and valleys too. Go back to school by learning the names of the most significant watercourses.
Guadalquivir 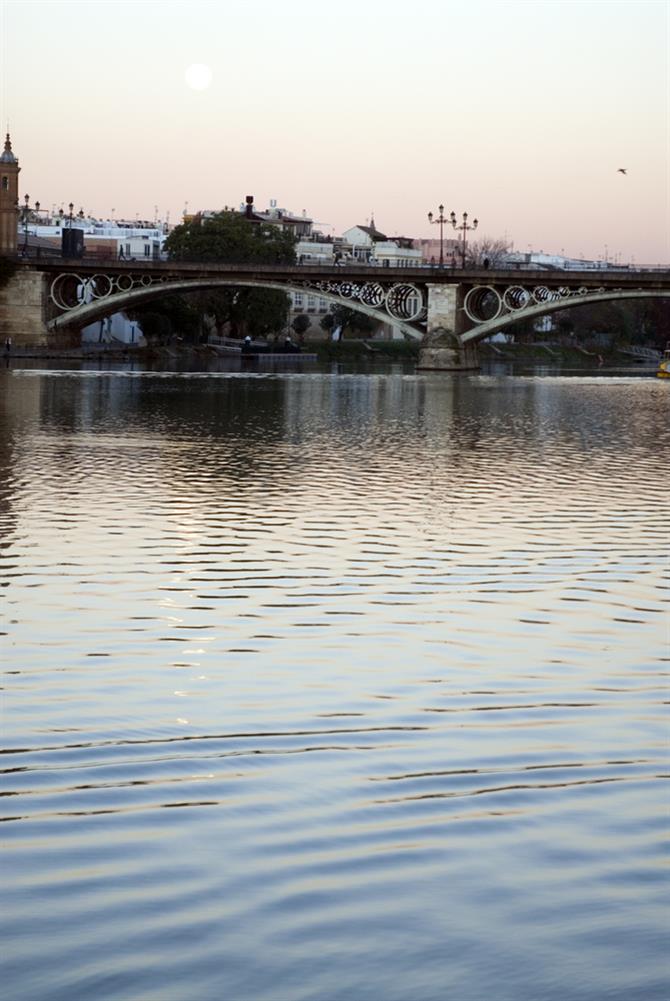 Seville is Spain’s only commercial river port, thanks to the Guadalquivir running through it. The second longest within Spain, it extends for 657 kilometres. Beginning in Jáen’s Cazorla mountain range, the Guadalquivir finishes at the Atlantic Ocean, rushing through the Gulf of Cádiz.
Tajo 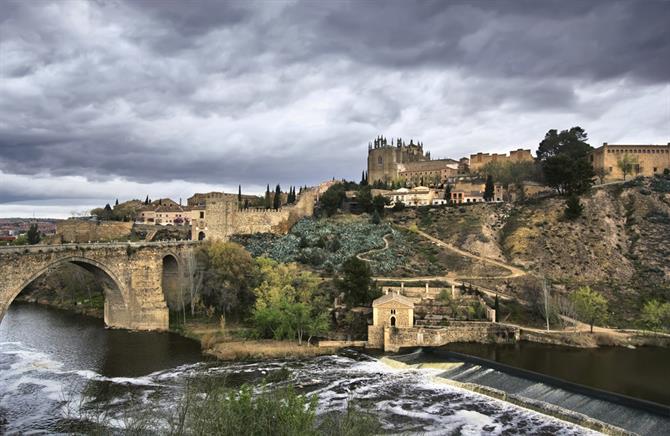 The Iberian Peninsula’s longest river, the Tajo begins its long journey at Aragon’s Sierra de Albarracín 150 km inland from the Mediterranean coast. It continues for 1,007 km, becoming the Tejo as it crosses the Portuguese border, emptying into the Atlantic Ocean close to Lisbon. In the above photo, it’s passing through Toledo.
Ebro 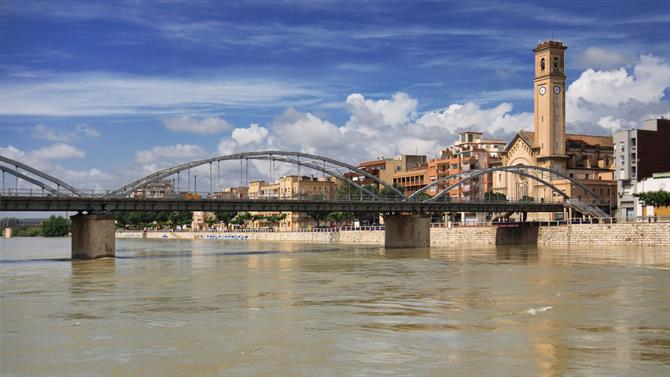 What Castilians call the Ebro is known as the Ebre in Catalonia. Discover its origin in Cantabria’s Fontibre which derives its name from the Latin words Fontes Iberis, meaning source of the Ebro. A delta on the Mediterranean bordering Amposta in Tarragona province is its final destination.
Guadiana 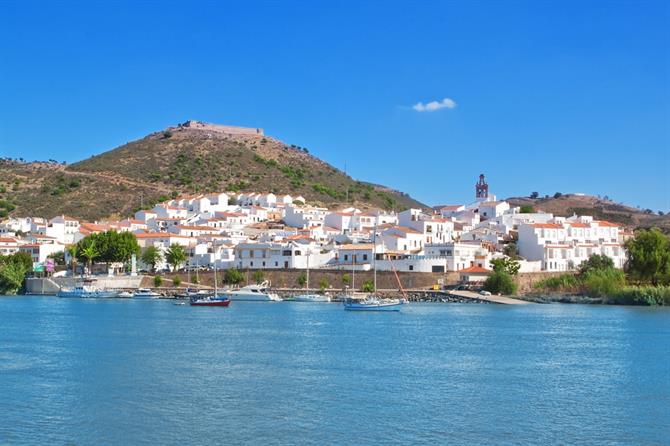 Separating those two old foes Portugal and Spain, the Guadiana keeps Spanish Extremadura and Andalucia apart from Portuguese Alentejo and Algarve. It includes the Aquelva Dam which results in Europe’s largest reservoir. Like the similarly Arabically-titled Guadalquivir, its ultimate destination is the Atlantic Ocean, also by way of the Gulf of Cádiz.
Duero 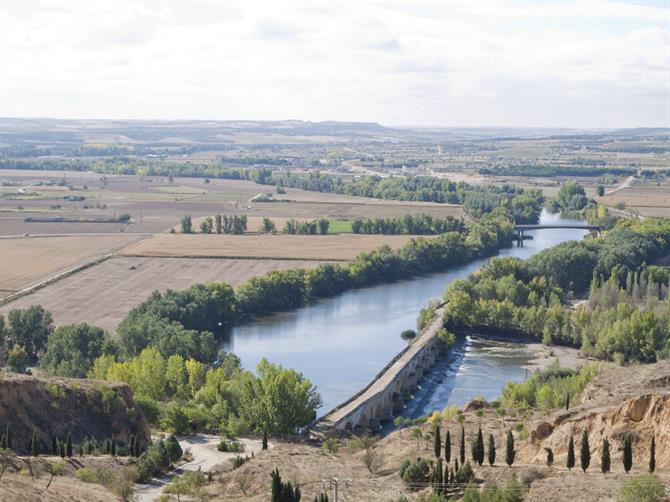 River Douro in the province of Zamora

There’s nothing dour about a river known in Portual as Douro. In fact, it’s believed, that its name comes from the Celtic tribes which occupied this area in pre-Roman times. On both sides of the Portugal-Spain border, there are famous wine-producing areas, with Spain’s Ribera del Duero particulary well regarded by oenophiles.
Miño

Galicia’s longest river extends to 340km. Like the Duero, it crosses the border into Portugal where it becomes the Minho. And again like the Duero, it houses one of Spain’s famous wine regions, Ribeiro, celebrated for its tart, fruity whites.
Segre 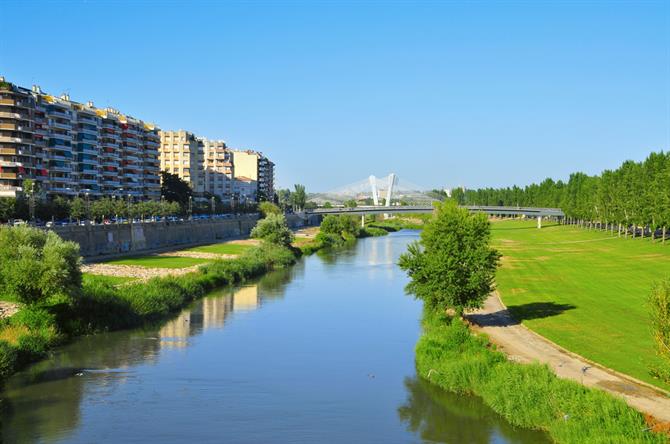 A tributary of the Ebro, the Segre’s basin takes in Andorra, France, and Spain. Poetically, when Andalucia was Al-Andalus, it was known as Nahr az-Zaytūn, River of Olives. As you can see above, it splits Catalonia’s Lleida in two. In total, 11 bridges span both banks as the Segre courses through the city.
Júcar

The Júcar’s 509km in length, beginning at Ojuelos de Valdeminguete, on the eastern flank of the Montes Universales, Sistema Ibérico. In 1982 it burst the Tous’s reservoir, causing the biggest-ever flood on Spanish history, killing more than 30 people. The flood’s known as La Pantanada de Tous.
Pisuerga

270km in length, Pisuerga is the Duero’s second major tributary. Rising in the Cantabrian Mountains in the province of Palencia, autonomous region of Castile and León, it most famously passes through Valladolid. Shortly after going through this city, it enters the Duero.
Genil 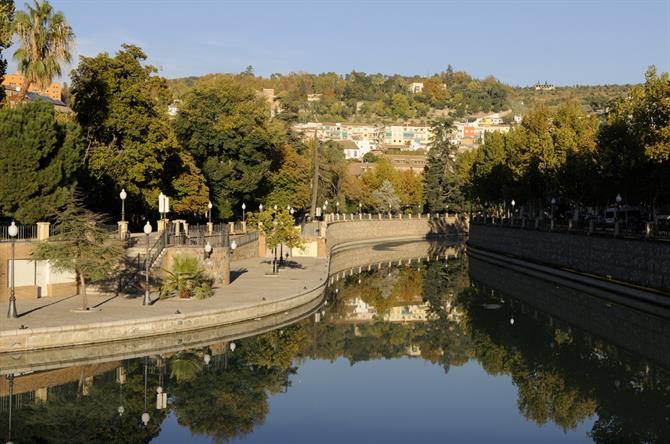